This year we rallied together as a company to adapt to new challenges in 2021. Thank you to every member of our team for all of your hard work to deliver the home improvement experience of our customer’s dreams. Thank you also to the wonderful homeowners we worked with this last year for trusting us with your homes! 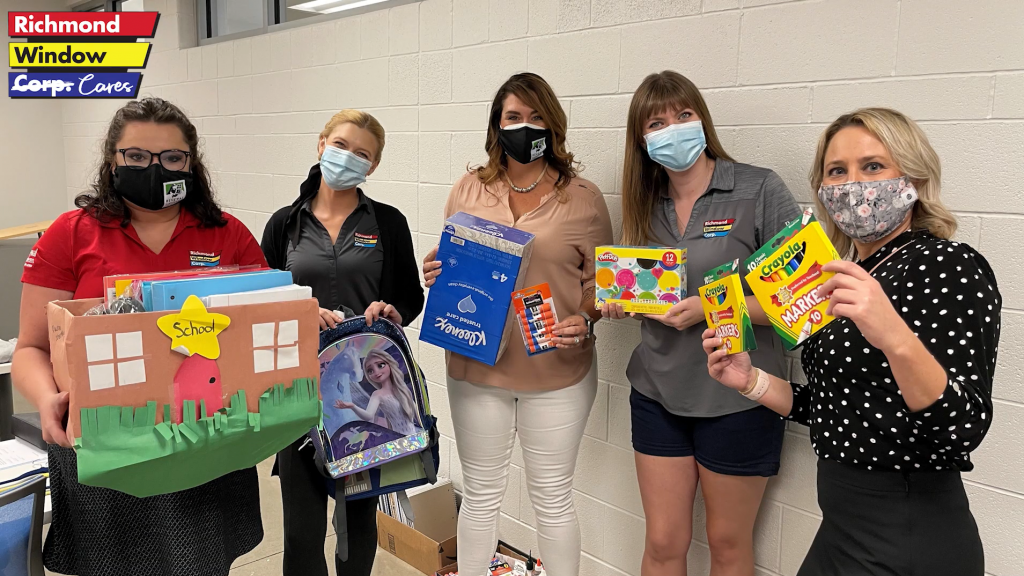 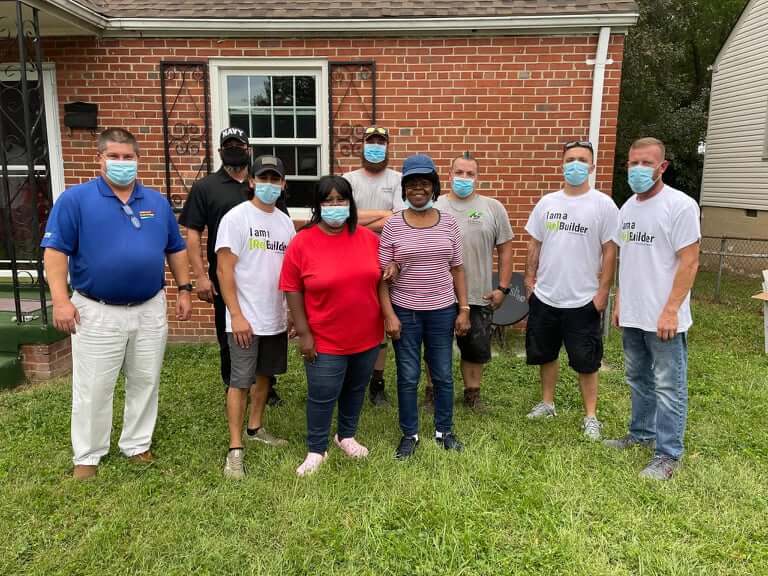 We put together a fun video to show some of our favorite moments from 2021!

We are excited to announce that we have been honored with the “Community Service Award” by PRO Remodelers of Central VA.

It is not easy to stand out in remodeling. The industry is filled with family businesses and passionate artisans who wanted to work for themselves—people who care as much about the finished product as they do the final price. To stand above, you need more than passion and quality. You also need innovation, creativity, and resourcefulness—qualities that can be found in every one of the PRO Remodeler Award winners.

We are honored to be listed among these other wonderful local companies. Congratulations to all of this year’s winners!

We are so proud to have won this Community Service Award. Every one of our hard working team members plays a part in winning this award.  From working with Rebuilding Together of Richmond to Back to School Drives to our American Cancer Society, ‘United Against Cancer‘ campaign, our kind-hearted team has been busy this year! Thank you to our community also for allowing us to be involved and trusting us with your homes.

Richmond Window Corporation has been in business since 1954, starting out with a location in Carytown and now located in Glen Allen, Virginia. RWC is the exclusive provider for Renewal by Andersen replacement windows and patio doors as well as a Platinum Plus Dealer for ProVia entry doors. Richmond Window goes beyond just providing superior products and outstanding service. We have a company culture of making a difference and genuinely believe in paying it forward. Our focus is people – both each other and the customers we serve. By taking care of each other, we take better care of our customers. We believe that you can see the difference in our approach to business in everything we do. See all available jobs at Richmond Window

We are honored to announce that we have been named “The Best Window Company” by Richmond Times-Dispatch.  Additionally, Richmond Window Corporation – Renewal by Andersen of Central Virginia has won this award two years in a row!

“The Best” in Richmond Award

In an era like no other, it’s good to celebrate favorites. The Times-Dispatch asked Richmonders to offer their thoughts about “The Best” of our region. Ultimately, they ended up with more than 120 categories, more than 80,000 nominations – and nearly 270,000 votes in total. Of course, everyone has his or her own favorites – and the beauty of Richmond is that there are tons of great choices in food, shopping, entertainment, home and garden, health and beauty, and services.

The Richmond Times Dispatch ‘The Best’ award is special because all votes come from members of our community – just like you! Congratulations to all of the winners, we love seeing our own community favorites have made the list as well.  See the full list of ‘The Best’ of Richmond by Richmond Times-Dispatch

Richmond Window wins “The Best” for the second year

We are so proud to have won this award again this year. Every one of our hard working team members plays a part in winning this award.  We believe that being named “The Best’ in Richmond shows our dedication to our mission statement: to provide our customers with the home improvement experience of their dreams! Learn more about Richmond Window Corporation

Richmond Window Corporation has been in business since 1954, starting out with a location in Carytown and now located in Glen Allen, Virginia. RWC is the exclusive provider for Renewal by Andersen replacement windows and patio doors as well as a Platinum Plus Dealer for ProVia entry doors. Richmond Window goes beyond just providing superior products and outstanding service. We have a company culture of making a difference and genuinely believe in paying it forward. Our focus is people – both each other and the customers we serve. By taking care of each other, we take better care of our customers. We believe that you can see the difference in our approach to business in everything we do. See all available jobs at Richmond Window 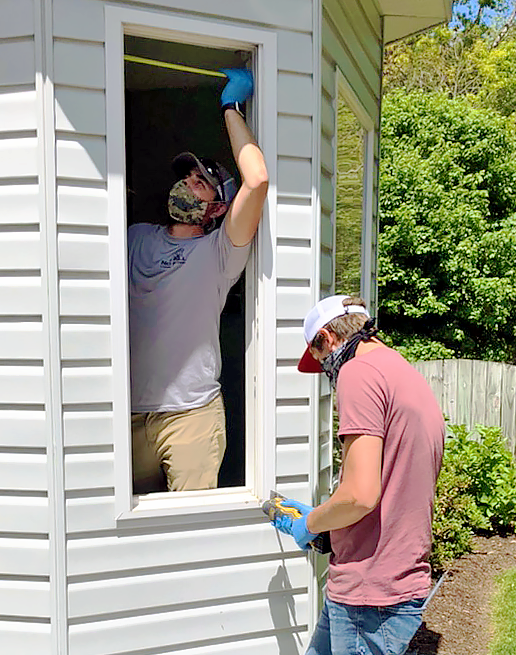 The Best Places to Work in Virginia survey evaluates employees’ experiences at our company, benefits we offer, as well as how we treat one another. This recognition speaks to how we strive to live by our Core Values: Install Integrity, Embody Respect, Champion Care, and Achieve Ambition. We won this award not only by following our Core Values, but also by everyone’s teamwork and ability to adapt to this challenging year.
“It’s an honor during these challenging times to be selected as one of the Best Places to Work in Virginia.” Says Page Ewell, President at Richmond Window Corporation, “This recognition highlights how our Richmond Window team has seamlessly adapted to working remotely. All while continuously engaging team members, effectively collaborating across all departments, and continuing to delight customers.” 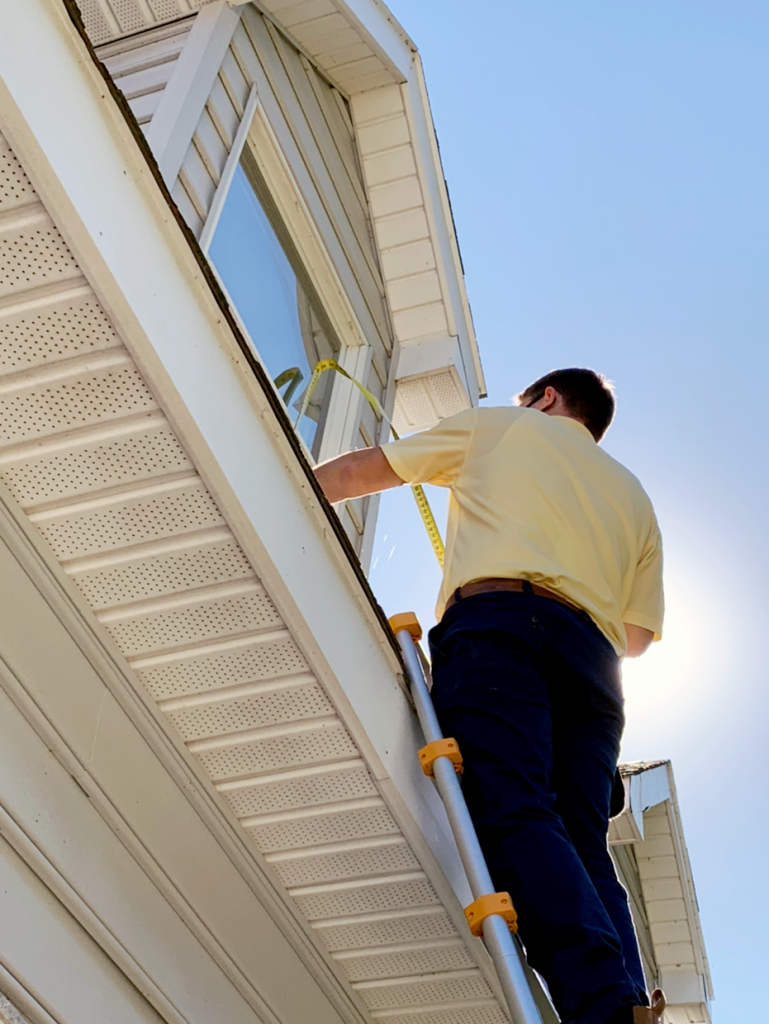 Sales Manager of Richmond Window Corporation, Steven Beegan also reflects on how this recognition translates to our customers. “A happy employee always gives an award-winning customer experience.” says Beegan, “We recently had the pleasure of welcoming our newest employee just two months after she became one of our customers. To me, when your customers want to work for you, you are doing something right.”
Companies from across the state entered the two-part survey process to determine the Best Places to Work in Virginia. The first part consisted of evaluating each nominated company’s workplace policies, practices, philosophy, systems and demographics (worth approximately 25% of the total evaluation). The second part consisted of an employee survey to measure the employee experience (worth approximately 75% of the total evaluation). The combined scores determined the top companies and the final ranking.
We would like to thank all of our amazing team members and our company leaders for making our company one of the best places to work in Virginia! 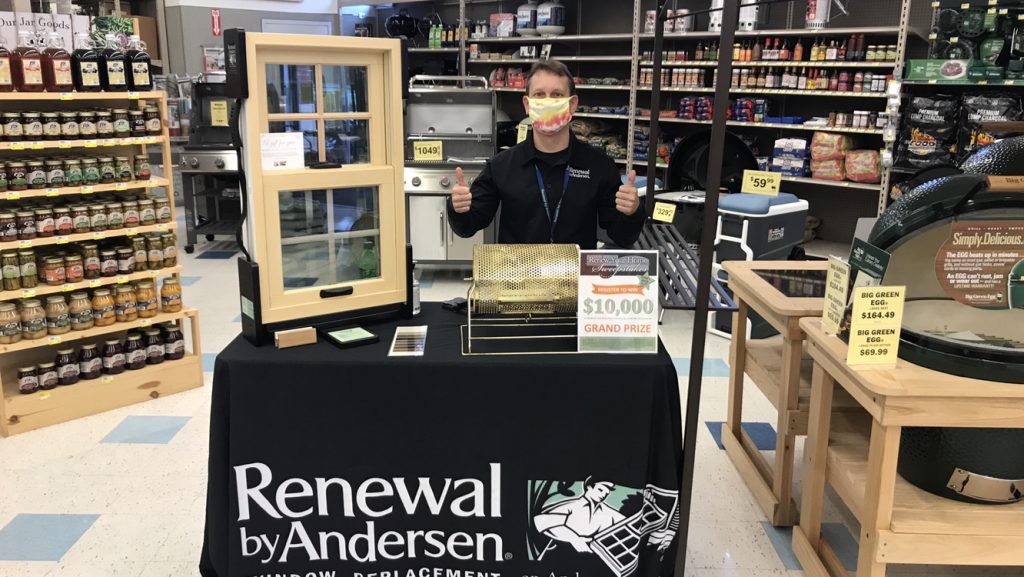 Andersen and a History of ENERGY STAR® Partnership

Andersen Corporation has been an ENERGY STAR® partner since their windows program began in 1998, becoming the first window manufacturer to earn the ENERGY STAR National Window Partner of the Year in 1999.
This is Andersen Groups fifth Sustained Excellence Award and the tenth time the company has been recognized by the ENERGY STAR program.
“Our customers trust Andersen for beautiful, enduring, high-performing windows and doors that also offer the highest standards of energy efficiency,” said Annie Zipfel, Andersen Corporation’s senior vice president and CMO.
“We are proud to align with the EPA and the ENERGY STAR program to help customers choose energy efficient products and continue to build awareness for the importance of energy efficiency.” 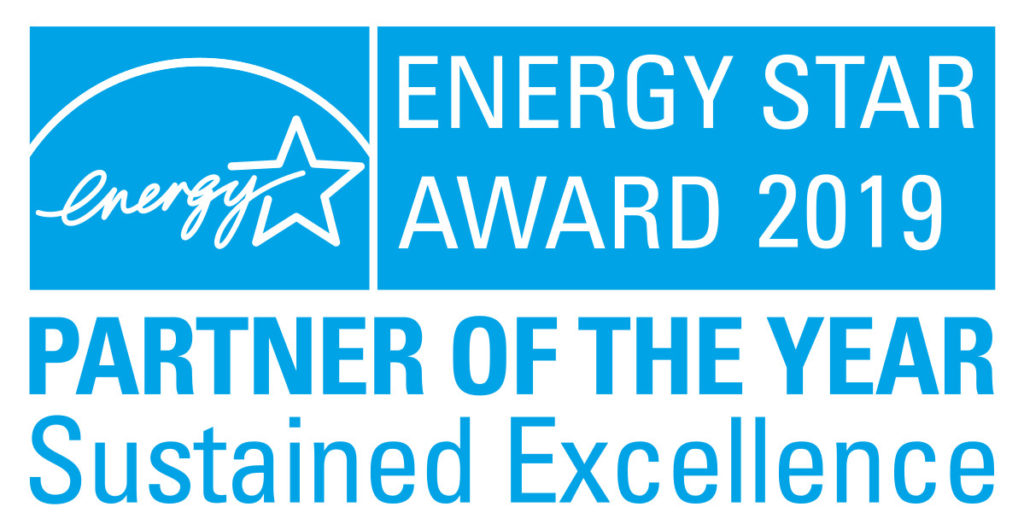 The highest honor among ENERGY STAR Awards is the ENERGY STAR Partner of the Year—Sustained Excellence Award. EPA presents the Sustained Excellence Award to partners that have already received ENERGY STAR Partner of the Year recognition for a minimum of two consecutive years and have gone above and beyond the criteria needed to qualify for recognition.
Winners span small, family-owned businesses to Fortune 500 organizations – representing industries like energy-efficient products, services, new homes, and buildings in the commercial, industrial and public sectors.
“I applaud the 2019 ENERGY STAR Award Winners,” said EPA Assistant Administrator for Air and Radiation Bill Wehrum. “Their innovation and leadership enhance America’s economic competitiveness. Reducing costly energy waste improves air quality and public health while protecting the environment.”

Additionally, Andersen is committed to reducing energy use across its operations, having recently confirmed that the Renewal by Andersen plant in Cottage Grove is now sourcing 100 percent solar energy for its operations.
Andersen Corporation has an enterprise goal to reduce its energy use by 20 percent by 2020, using 2013 as a baseline.

Richmond Window Corporation, Serving Over 50,000 Families in Central VA, Since 1954

Richmond Window Corporation has been awarded a Top Workplaces 2019 honor by The Richmond Times-Dispatch.
The award is based on anonymous employee feedback gathered through a third-party survey administered by research partner Energage, that is used to measure several aspects of workplace culture, including alignment, execution, connection, and more. 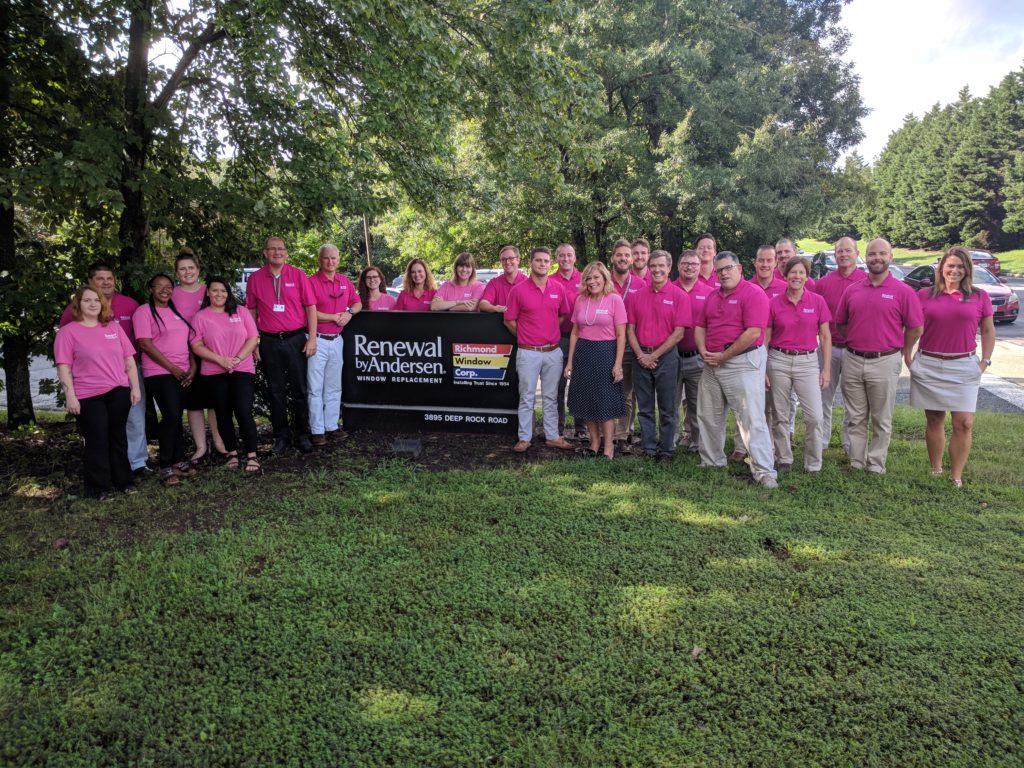 “One of our big focuses this year at Richmond Window Corp. has been the rolling out of our Core Values, the principles which drive our company forward to be the premier destination for top talent by providing an extraordinary workplace,” says Richmond Window CEO, Page Ewell.
“Our mission is to strive to provide the home improvement experience of our homeowner’s dreams. So, to be recognized with this award for our internal culture, it shows we are putting forward the focused effort to ensure our goal is recognized every day.” 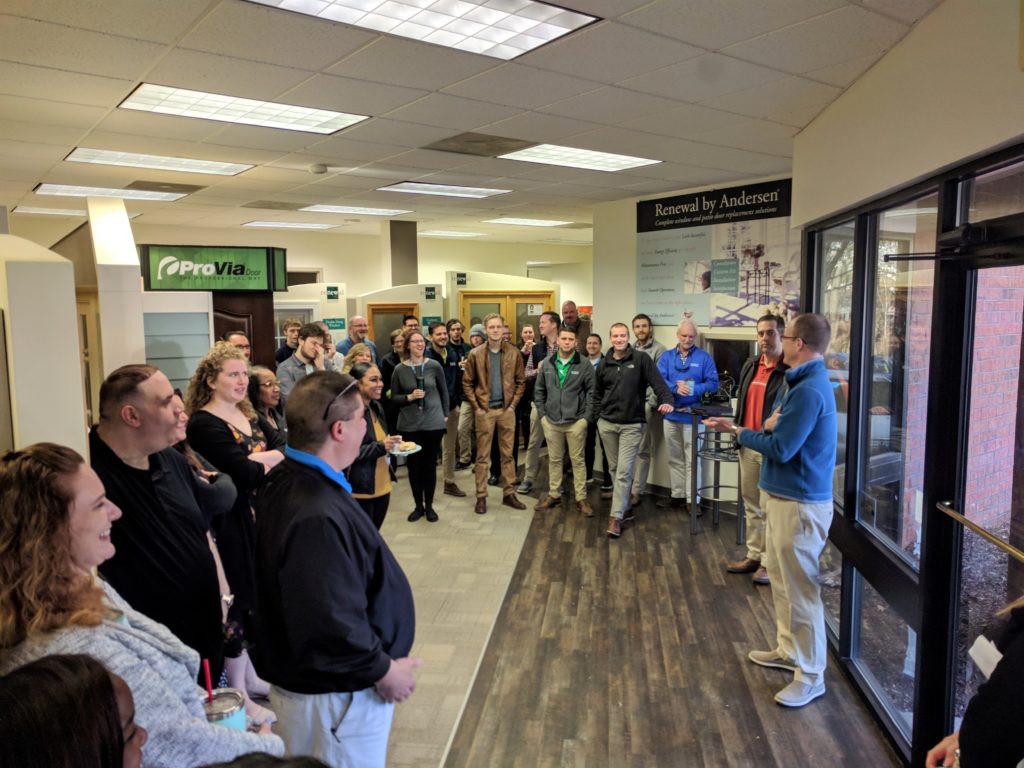 “Top Workplaces is more than just recognition,” said Doug Claffey, CEO of Energage.
“Our research shows organizations that earn the award attract better talent, experience lower turnover, and are better equipped to deliver bottom-line results. Their leaders prioritize and carefully craft a healthy workplace culture that supports employee engagement.”
“Becoming a Top Workplace isn’t something organizations can buy,” Claffey said. “It’s an achievement organizations have worked for and a distinction that gives them a competitive advantage. It’s a big deal.” 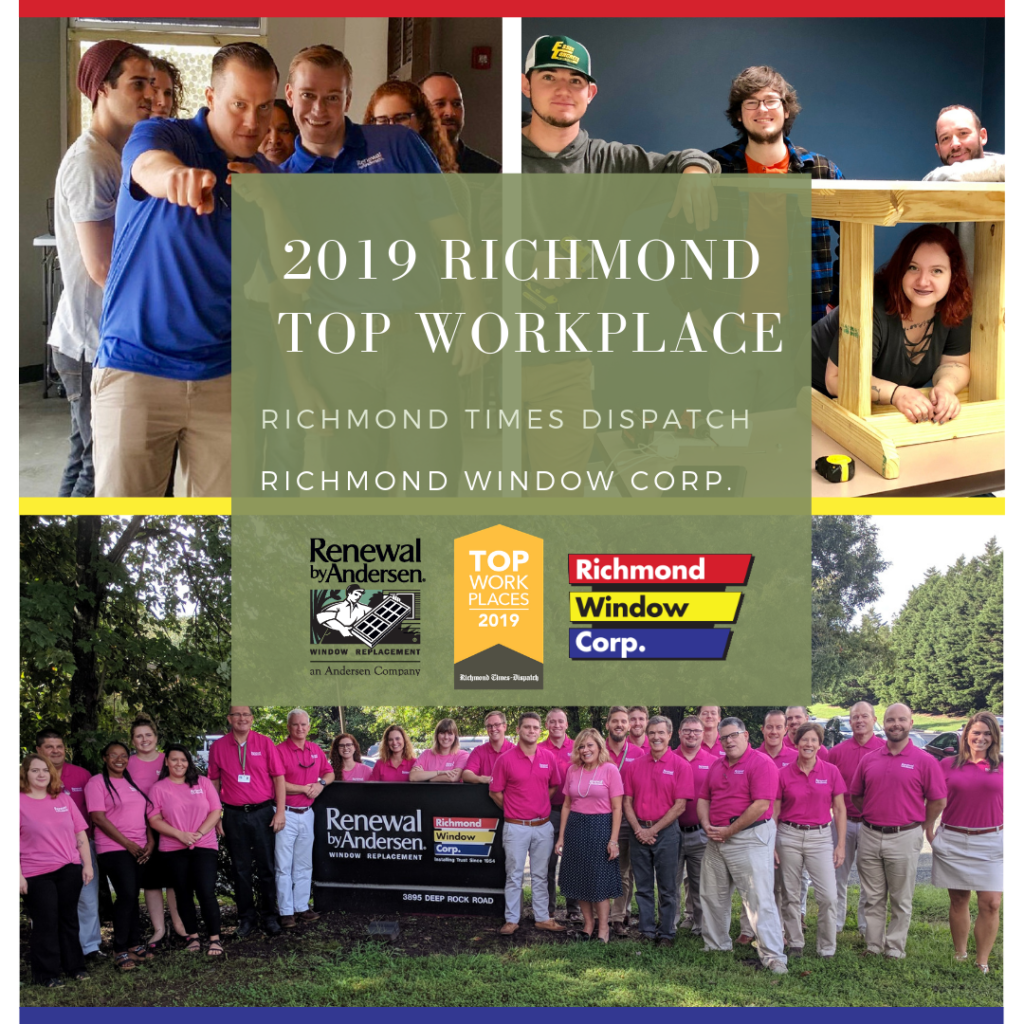 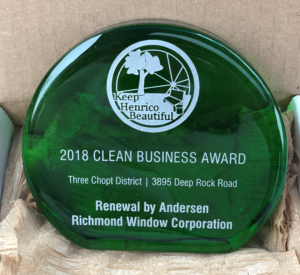 Richmond Window Corporation is honored to have been selected as the Keep Henrico Beautiful 2018 Clean Business Award Winner for Henrico’s Three Chopt district.
This award reflects environmentally conscious practices at the business and the environmental impact of the product and service the company provides to the community.
In receiving the award, we were noted for our waste reducing and energy-efficient windows and patio doors.

At Richmond Window Corporation, we know the importance of high-performing and environmentally conscious products. Our Renewal by Andersen windows set the standard for energy efficiency, they’re the only window products to have received the SCS IndoorAdvantage Gold™ certification; and Renewal by Andersen features the highest SCS-certified recycled content of any window replacement company.
We’re particularly proud that Renewal by Andersen has been awarded as a 2018 ENERGY STAR® Partner of the Year. We’re committed to continue to be the industry leader in eco-friendly and energy-efficient pursuits.
We’re also thankful for every one of the families who have chosen Richmond Window Corporation for our high-quality, energy efficient Renewal by Andersen products and Signature Service. 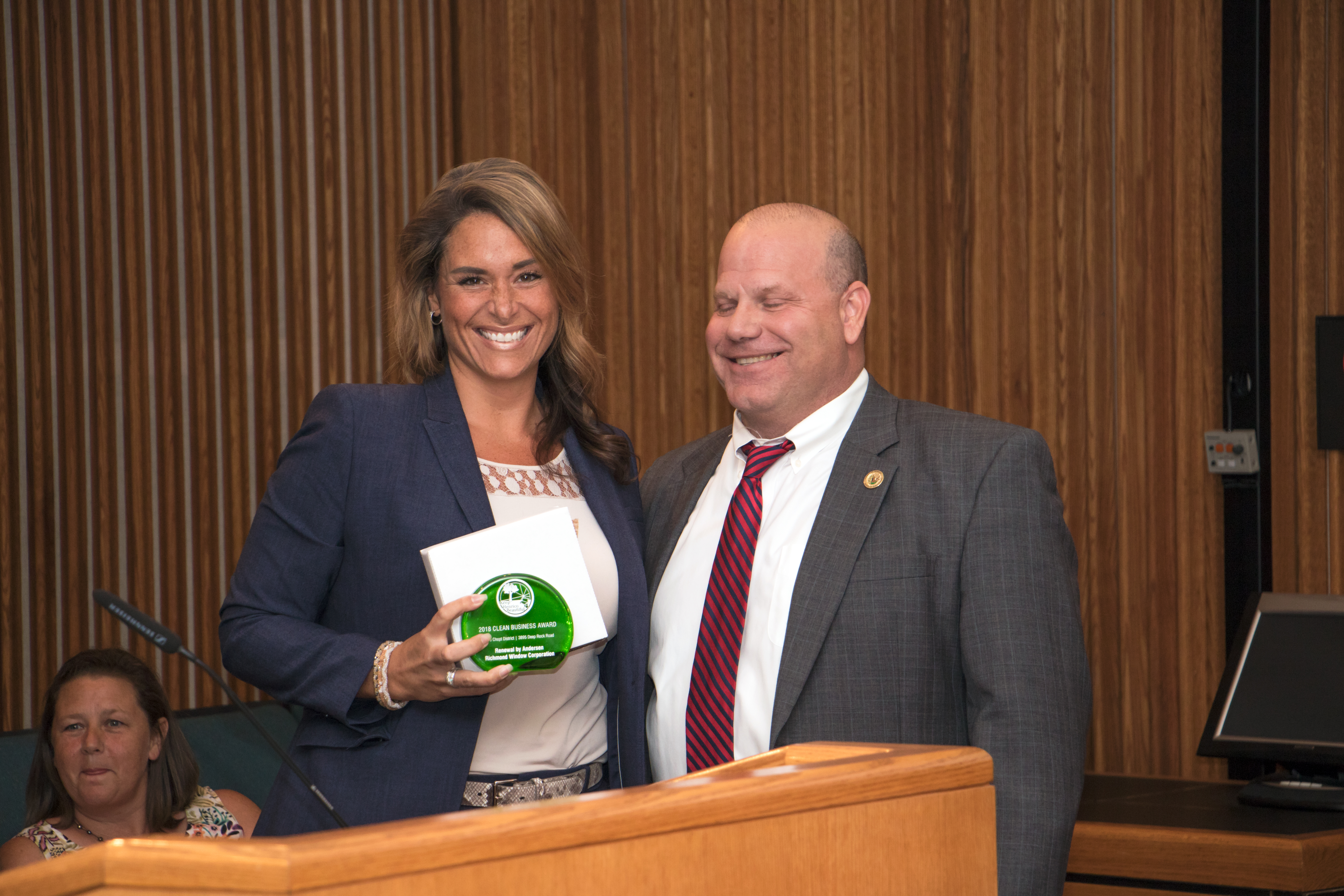 If you are interested in setting an appointment with us to receive an in-home education and exact price quote for window or patio door replacement or have a question about our premium products or Signature Service, please fill-out our contact form below and we will get back with you as soon as possible.
For more on Richmond Window’s Environmental Commitment, click here.

2018 ENERGY STAR® and Renewal by Andersen


Oops! We could not locate your form.